There are strong links between deprivation and poor mental and physical health. This article outlines the evidence and discusses how mental health nurses can have an impact

Social inequalities are a predictor of poor mental and social outcomes, and years of life lived in disability. The wider the gap between the richest and the poorest in society, the worse the mental and physical health of both groups. Social and clinical studies have set out the specific interrelationship between social deprivation and physical and mental health. More recently mental health nurses have changed their education and practice to improve the identification and management of physical health problems. Mental health nurses can have some impact on reducing social inequalities, in particular around supporting people to access work schemes, such as individual placement and support.

Good mental and physical health are not equally spread across the country (Marmot et al, 2020a). The presence of good physical and mental health follows a social gradient: the environments into which people are born, live and work determine their health outcomes as measured by life expectancy and years lived with disability. Males in the poorest areas of the UK can expect to live for 9.4 years less, and females 7.6 years less, than those from the most affluent areas (Office for National Statistics, 2021a).

The latest Marmot review – Marmot et al (2020a) – is a follow-up of a landmark assessment of social inequalities first published in 2010 (Marmot et al, 2010); it shows that health and life expectancy in the UK has stagnated and not kept pace with its economic peers. Furthermore, the consequences of social inequalities have been revealed in sharp relief during the Covid-19 pandemic, as mortality from the disease has mirrored all-cause mortality along the social gradient (Marmot et al, 2020b). Social inequalities are not just bad for the poor, they are bad for the rich. The wider the inequality gap, the worse the physical and mental health of the richest people compared with those in societies that have smaller equality gaps (Wilkinson and Pickett, 2019; Ribeiro et al, 2017).

Across the world, mental health conditions are strongly associated with areas of social deprivation (Allen et al, 2014). The relationships between social factors and mental health are likely to be bi-directional – for example, people with severe mental illness are more likely to come from socially fragmented and densely populated neighbourhoods (Solmi et al, 2020; Lloyd et al, 2015).

Unemployment rates are higher for those with schizophrenia throughout Europe than they are for the general population (Huxley et al, 2021), and disadvantage also extends to other social factors. Hakulinen et al (2019) followed up 2.4 million individuals with a first episode of psychosis over 35 years and found increased odds of unemployment, no secondary or higher education and living alone. These risks increased with the number of relapses and a longer time being spent receiving treatment.

Mental health, physical health and social inequalities are closely related; as an example, obesity and depression are linked conditions and major public health concerns. The percentage of people in England who are obese rose from 15% to 28% between 1993 and 2018 (NHS Digital, 2019). Obesity increases the risk of mortality from conditions such as cardiovascular disease, type 2 diabetes, cancer and stroke (Bhaskaran et al, 2018).

People who are obese are more likely to have depression and the risk of developing obesity is higher in those who have a major depressive disorder (Luppino et al, 2010). The two conditions share biological and psychological causes, and are linked to social inequalities. Huet et al (2019) described how low-grade inflammation from adipose tissue and changes to the gut microbiome can lead to neuroinflammation and changes to neurotransmission. Furthermore, the stress response through the hypothalamus–pituitary–adrenal axis, affects appetite and gives rise to:

Obesity and depression are more prevalent in areas of social deprivation, with children in these neighbourhoods more likely to have, or to develop, physical and mental conditions in adulthood (Marmot et al, 2020a). At the individual level, economic hardship is associated with food poverty and increased levels of unsustainable debt, which, in turn, are associated with suicide, depression and obesity (Richardson et al, 2013). The cycle is illustrated by the finding that the bottom 10% of the population in terms of household income would have to spend 74% of their income on food to eat healthily (Marmot et al, 2020a).

In socially deprived communities there are environmental hazards for obesity and depression. The high street lacks diversity, has increased levels of street furniture, litter, and exposure to air pollution (Daly et al, 2018). Fast food restaurants are known to cluster in socially deprived areas and two for one offers are frequently linked to obesogenic foods (Macdonald et al, 2018; Cavill and Rutter, 2014). Combined with a lack of community resources, this leads to poor community cohesion and social isolation, which in turn have a negative impact on mental health (Giordano and Lindstrom, 2010).

For those with schizophrenia, the weighted average of years of life lost for men and women is 14.5 years (Hjorthøj et al, 2017). The reasons for reduced life expectancy include suicide, accidents, and increased mortality from physical health conditions. Across all mental health conditions, there is an increased risk of mortality; in severe mental illness, there is a reduction in life expectancy comparable to heavy smokers (Chesney et al, 2014). A breakdown of physical health problems from GP records published by Public Health England (PHE, 2018) showed an increased risk across a range of conditions (Fig 1). 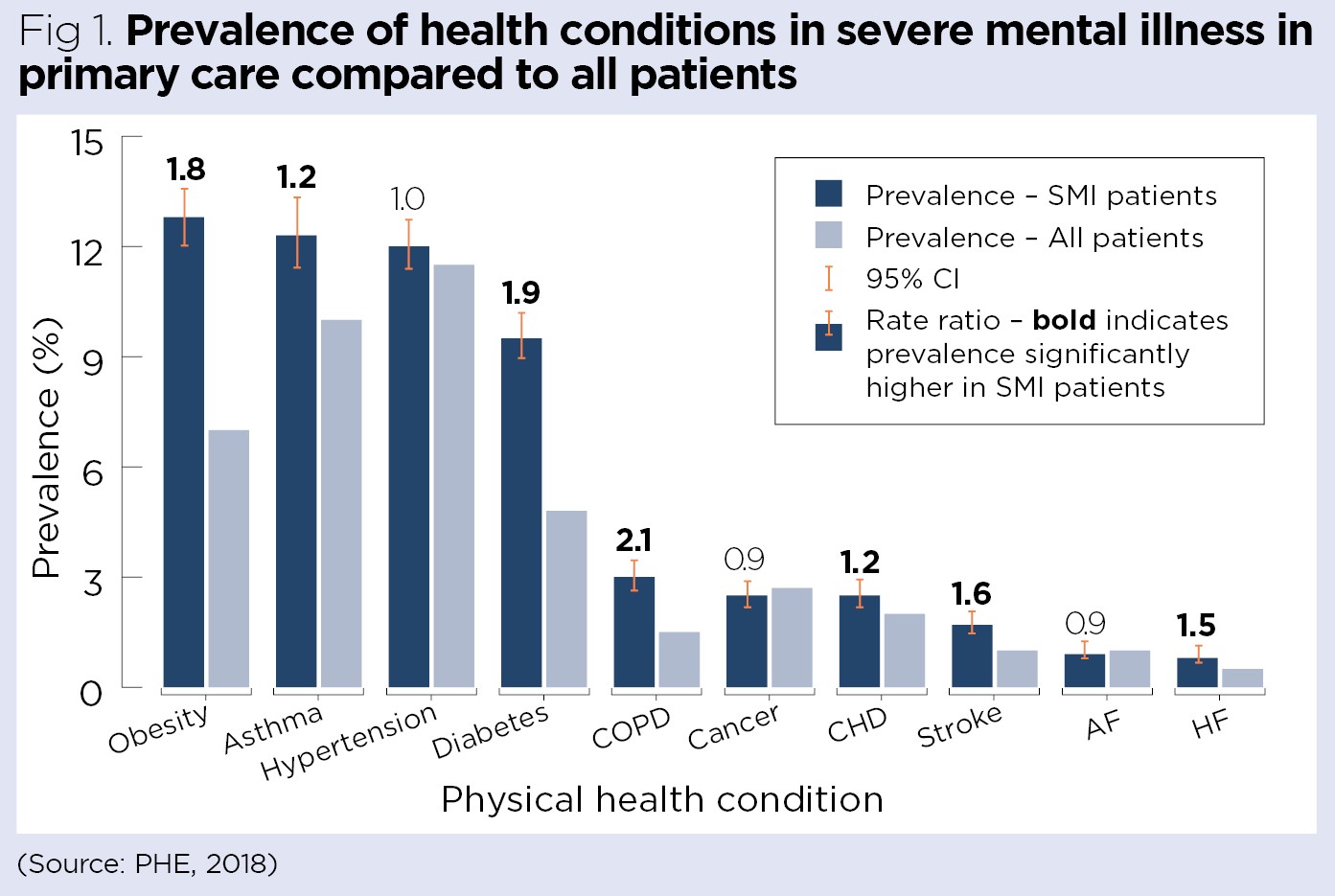 The factors that explain the risk are summarised in Table 1 (Working Group for Improving the Physical Health of People with Severe Mental Illness, 2016). The role of social inequalities has previously been understated, however, PHE (2018) has now highlighted the impact of the equality gap on physical health. 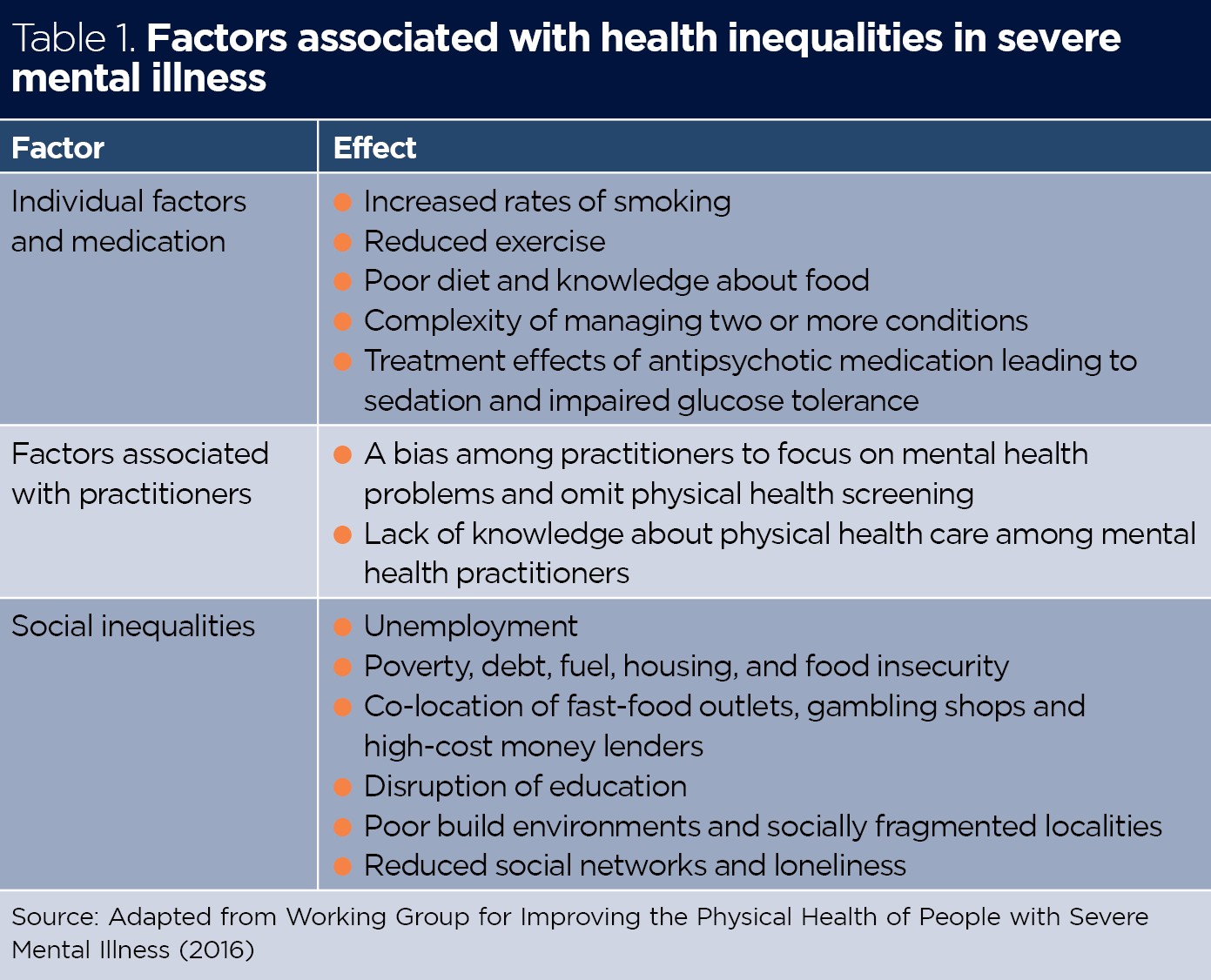 Nazarko (2017) described the actions required at both the national, local and individual practitioner level to improve the physical health of people with severe and enduring mental health conditions. Mental health nurses have a key role in developing practice in these areas. For example, at the national and local levels, change is occurring through the Royal College of Psychiatrists’ (2019) accreditation schemes, where mental health nurses advise on standards and review teams; these now include physical health requirements as core standards.

The Marmot et al (2020a) review recommendations focused on: reducing child poverty; investing in children; developing good education and jobs for all; and creating schemes and incentives that improve local environments and community cohesion. Many of the recommendations were aimed at local and national government, but there are examples of actions mental health nurses can take.

Access to good employment is known to improve mental health outcomes (Modini et al, 2016). The Marmot et al (2020a) review stated that incentivising and improving work opportunities can reduce inequalities. An established and effective approach in mental health is individual placement and support (Bond et al, 2020; Drake et al, 2012). Employment advisors work with employers and individuals to help them seek, obtain, and stay in competitive jobs. An important part of the role is to meet up with the employee and employer during the first few months of starting the job – when expectations and problems can be addressed – to improve job retention.

Employment workers typically sit within mental health teams and Improving Access to Psychological Therapies (IAPT) services. This approach is a recommended component of early intervention in psychosis services (NICE, 2014). Furthermore, where the onset of mental health problems occurs in adolescence with disruption to education, this has been adapted to include both supported employment and education in young people (Rosenheck et al, 2017).

Mental health nurses have a key role in supporting someone who considers themselves as job ready by connecting them with employment advisors. A key question nurses can ask is are you ready for work? In a similar way to smoking cessation, practitioners often omit referring people on as they focus more on the mental health problem and its treatment at the expense of wider social and health gains.

Another area where nurses can have an impact is by mapping an individual’s social network and engaging the person in maximising their social connections. Having friendships and being socially connected is associated with better mental health for people with psychosis (Giacco et al, 2012). How this is achieved is less clear. Mann et al (2017 ) reviewed interventions to reduce loneliness in people with mental health problems and described four groups: challenging cognitions (negative expectations of social contacts); social skills training; creating wider community activities; and using social prescribing.

Social prescribing has been used extensively in primary care for people with long-term conditions, including mental health problems. For example, Wellbeing Enterprises is a social enterprise that has been running in Liverpool since 2005. It draws on people, local resources and assets to create health-orientated activities that connect people through social prescribing link workers. This may include connecting people to physical exercise, use of green spaces and social activities.

Social prescribing is viewed intuitively as having a benefit, but reviews conclude that evidence lags behind its implementation. Bickerdike et al (2017) and Husk et al (2020) both identify that the claims of positive effects are based on poorly done trials and that better evaluations are needed to support NHS policy and funding.

Since the global financial crisis of 2008, the UK has seen a widening in social and health inequalities and has fallen behind its economic peers in life expectancy. Good mental and physical health are related to the places people are born into, grow up and work in, and reducing social inequalities can improve the mental and physical health of the nation. All three are linked and require action at a national, local and individual level to bring about change.

For mental health nurses, the current best evidence to reduce the impact of social inequalities on health is around improving knowledge and skills about acute and long-term physical health conditions such as obesity, diabetes, and cardiovascular disease and employment support. While social prescribing has been extensively deployed in primary care, there is, as yet, no evidence base supporting its use in secondary mental health services outside of a research study.

Bhaskaran K et al (2018) Association of BMI with overall and cause-specific mortality: a population-based cohort study of 3.6 million adults in the UK. The Lancet Diabetes and Endocrinology; 6: 12, 944–953.

Giordano GN, Lindstrom M (2010) The impact of changes in different aspects of social capital and material conditions on self-rated health over time: a longitudinal cohort study. Social Science and Medicine; 70: 5, 700–710.

Mann F et al (2017) A life less lonely: the state of the art in interventions to reduce loneliness in people with mental health problems. Social Psychiatry and Psychiatric Epidemiology; 52: 6, 627–638.

National Institute of Health and Care Excellence (2014) Psychosis and Schizophrenia in Adults: Prevention and Management. NICE.