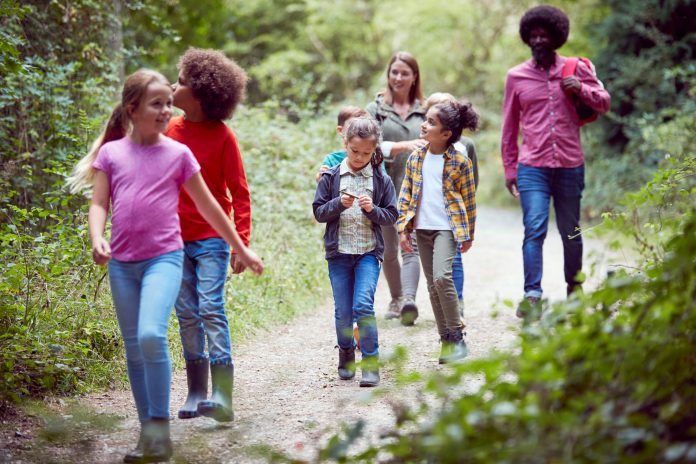 They used data relating to 3,568 children and teenagers, aged nine to 15 years, from 31 schools across London, where 1 in 10 between the ages of five and 16 are already estimated to suffer from a clinical mental health illness.

The results showed that higher daily exposure to woodland was associated with higher scores for cognitive development and a 16% lower risk of emotional and behavioural problems two years later.

“Why these health benefits are received remains unclear, especially in adolescents.

“These findings contribute to our understanding of natural environment types as an important protective factor for an adolescent’s cognitive development and mental health and suggest that not every environment type may contribute equally to these health benefits.

“Forest bathing, for example (being immersed in the sights, sounds and smells of a forest), is a relaxation therapy that has been associated with physiological benefits, supporting the human immune function, reducing heart rate variability and salivary cortisol, and various psychological benefits.

“However, the reasons why we experience these psychological benefits from woodland remain unknown.”

“It’s been suggested previously that the benefits of natural environments to mental health are comparable in magnitude to family history, parental age and even more significant than factors like the degree of urbanisation around you, but lower than your parents’ socio-economic status.

“Sensory and non-sensory pathways have been suggested as potentially important for delivering cognition and mental health benefits received from exposure to nature.

“It’s critical for us to tease out why natural environments are so important to our mental health throughout the life course.

“One possible explanation for our findings may be that audio-visual exposure through vegetation and animal abundance provides psychological benefits, of which both features are expected in higher abundance in woodland.

“Even though our results show that urban woodland is associated with adolescent’s cognitive development and mental health, the cause of this association remains unknown.”

The full study has been published in Nature Sustainability.

We use cookies on our website to give you the most relevant experience by remembering your preferences and repeat visits. By clicking “Accept”, you consent to the use of ALL the cookies.
Cookie settingsACCEPT
Manage consent

This website uses cookies to improve your experience while you navigate through the website. Out of these, the cookies that are categorized as necessary are stored on your browser as they are essential for the working of basic functionalities of the website. We also use third-party cookies that help us analyze and understand how you use this website. These cookies will be stored in your browser only with your consent. You also have the option to opt-out of these cookies. But opting out of some of these cookies may affect your browsing experience.
Necessary Always Enabled
Necessary cookies are absolutely essential for the website to function properly. These cookies ensure basic functionalities and security features of the website, anonymously.
Functional
Functional cookies help to perform certain functionalities like sharing the content of the website on social media platforms, collect feedbacks, and other third-party features.
Performance
Performance cookies are used to understand and analyze the key performance indexes of the website which helps in delivering a better user experience for the visitors.
Analytics
Analytical cookies are used to understand how visitors interact with the website. These cookies help provide information on metrics the number of visitors, bounce rate, traffic source, etc.
Advertisement
Advertisement cookies are used to provide visitors with relevant ads and marketing campaigns. These cookies track visitors across websites and collect information to provide customized ads.
Others
Other uncategorized cookies are those that are being analyzed and have not been classified into a category as yet.
SAVE & ACCEPT